Built between 1871 and 1877 Fort Igmánd is the newest fort of the Fort System of Komárom. The role of Fort Igmánd was to defend Komárom from an attack from the South direction, and also to provide artillery support for Fort Monostor and Fort Csillag. At the beginning of World War II it served as a safe-haven for Polish soldiers and officers and after October 1944 it was used for internment camp for Jews and Gipsies. During the siege and bombing in Komárom the outer parts of the casemates were used as bomb shelters by local citizens. Between 1945 and 1948 the fortress accommodated a screening camp where soldiers and citizens returning home from Western Europe went through a political investigation. Later the rooms and chambers of Fort Igmánd were used for workshops, warehouses and emergency accommodations. 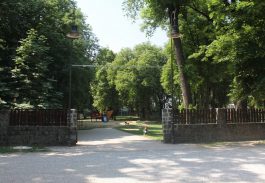