Fort Monostor, built between 1850 and 1871, counts as the biggest Central-European fortress of modern history. This classicistic war historic monument, enlisted in the UNESCO World Heritage Tentative List, offers a magnificent sight with its monumental walls built of carefully shaped and assembled stones, its ramparts covered with soil to a depth of 3-4 metres and its several kilometre long underground tunnel system (casemate network). The following data serve as outstanding proof for the truly monumental dimensions of the fortress: the building itself takes up an area of 25 hectares, together with the related shooting range it occupies a total area of 70 hectares. The floor space of the buildings amounts to 25 680 m2. The 640 rooms were once suitable for the accommodation of max. 8000 soldiers. Following its erection, the fortress served several generations of the Hungarian home defence forces. Apart from defending the central castle (North-Komárom), its staff also performed the task of controlling ship traffic on the Danube River. No actual war activities took place at the fort, as a result of which it was primarily used for the purposes of military training and ammunition storage. During World War I it mainly functioned as an enlistment and training centre. During World War II it hosted the command of Regiment 22, the first and second battalion of which were transported from here straight to the battles along the River Don. After World War II the walls of the fortress gave shelter to numerous Hungarian families deported from Czechoslovakia. Between 1945 and 1991 the South Army Group of the Soviet Red Army converted the building into the biggest ammunition storage facility of Central Europe. After they had left the fortress, it eventually ceased to serve military purposes.

Roman Catholic Church of the Heart of Jesus in Komárom 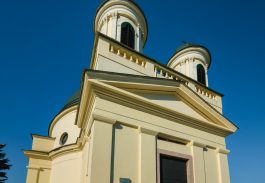 The Church of St. Rosalia